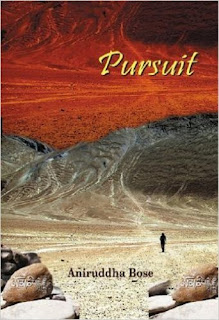 After reading two books by Aniruddha Bose which were originally written in Bengali and then translated into English by some translator, I have finally completed reading "Pursuit" written originally in English by the man himself. This book is very different than the ones I read before and it has also become my favorite novel by the author. It is a great thriller which also has philosophical and spiritual tone to it. It is great to read such varying scenarios in a single book of 300 pages. And as author claims this is actually a thriller which possess - multiple mysterious murders; beautiful sirens; handsome hunks; powerful men who can change the world; a staggering international conspiracy; highly complex international geo-economics and politics; the just dose of sex and so on.

Mr. Bose have written this novel in a very fluid language which makes it easy for reader to finish it in one sitting. The narration is perfect as author have kept the timeline of the events simple. The way multiple characters are developed also makes it easy for you to understand them and their mindset. The protagonist, Elena, is described so beautifully that you wish to read more about her every time author shifts his attention to other issues in the book. Panchet Dzongpa is another character about whom you want to keep reading as the kind of spiritualism, universal peace and harmony that he preaches to Elena surely gets imbibed in your mind too. The inspectors and officials are also given a smart personality which makes this thriller little more special.

The first half discusses about how several murders take place and how police keeps doubting different suspects. Reading about how personalities from different countries are thinking about becoming the superpower of the world and later knowing their involvement with the murders is really surprising. In between all of this, the philosophical quotient maintained by Elena and Dzongpa is also a boost to this story as the preaching is totally different from what is actually happening in other parts of the book. Haha! The good research of the author is evident from many geo-economical and political issues that he has discussed through his characters.

The second half becomes more interesting than the first as the whole attention of the officials gets focused towards a single girl and she is being accused of all the murders. It's delighting to read the anti-climax of how the whole thing got unfolded and knowing the tactics of the murderer and the people behind him/her. The way climax is ended again with the spiritual touch gives this book a pleasant and peaceful ending. While reading this thriller, I could feel that the author almost belongs in the same league of Ravi S and Ashwin S. This book discusses some complex topics but still attract the masses. I give it an extra-ordinary 4.5* out of 5.

Email ThisBlogThis!Share to TwitterShare to FacebookShare to Pinterest
Labels: fiction